Power generation in India is endowed with abundant solar energy capacity. Even so, the energy output of modules depends on external factors such as the intensity of the sun, load demand, environmental changes, etc. Maintaining the intermittency of solar cells from unprecedented factors might not be enough. And many valuable infrastructures are not ready to face such adversity yet.

In this regard, the present study aims to analyze the impact of the persisting occurrence of Cyclones in the western regions of India.

Given all major atmospheric parameters, it could be noted that cyclones have the extensive capacity to damage a solar module. Henceforth, Mitsui Chemicals India carried out a test campaign to detect the EL defects of Tauktae-affected cyclone modules.

Regardless of quality verification test standards, a number of surface defects were observed. Through the robust procedure of Fault Identification and Root Cause Analytics, the development of hot spots was spotted. These hotspots impose a surging limitation on the performance of affected cells. Moreover, it is believed that if such faults continue to penetrate into the solar panel frame, they can permanently deteriorate the modules.

Amid the overall rising temperature, there is a high probability of cyclones becoming a regular phenomenon. This, in turn, exhibits an unlikely impact on the capability of delivering energy and power losses.

As observed in the case, climate change may result in performance degradation. Thus, it is high time to take special adaptation procedures that are anticipated to be cost-effective in long term.

Mitsui Chemicals India investigated the impact of Tauktae Cyclone on PV performance both through noticeable differences and default detection. The group has developed a protocol to emphasize factors that leads to performance degradation and significantly affect reliability. Our in-house developed and proposed test campaign not only reduces cost pressure from the manufacturer but also improves the quality and lifespan of the modules that are produced.

The two major diagnostic methods that were undertaken to identify failure prospects include- Visual Defects Observation and EL Defects. It can be seen from the visual experimental results that most of the solar modules include cracks, corrosion, and micro-shading.

Along with a reduction in the tensile strength of the frame, wind gusts impact the flow of current to the ground. Moreover, it reduces the dielectric strength of the material thereby, causes corrosion. 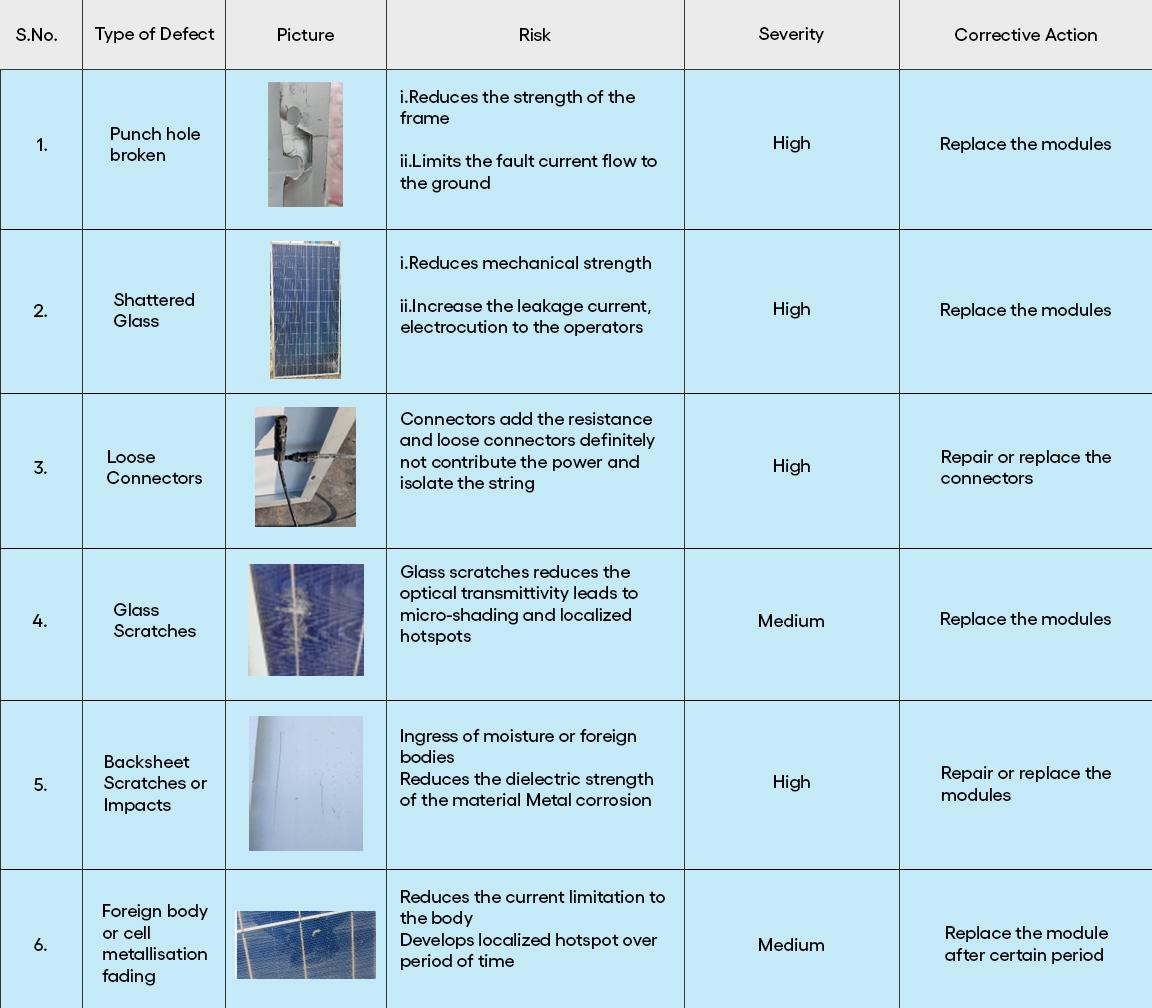 Since it is extremely difficult to rely on manual detection, the electroluminescence defect detection procedure was adopted. While extending our core specialization in technical due-diligence, relative intensity is captured and high, medium & low severity is marked. Wind storms have had several mechanical impacts with Poor Ribbon soldering accounting for the maximum intensity.

In addition, some of the other major EL Defects that were ascertained include: 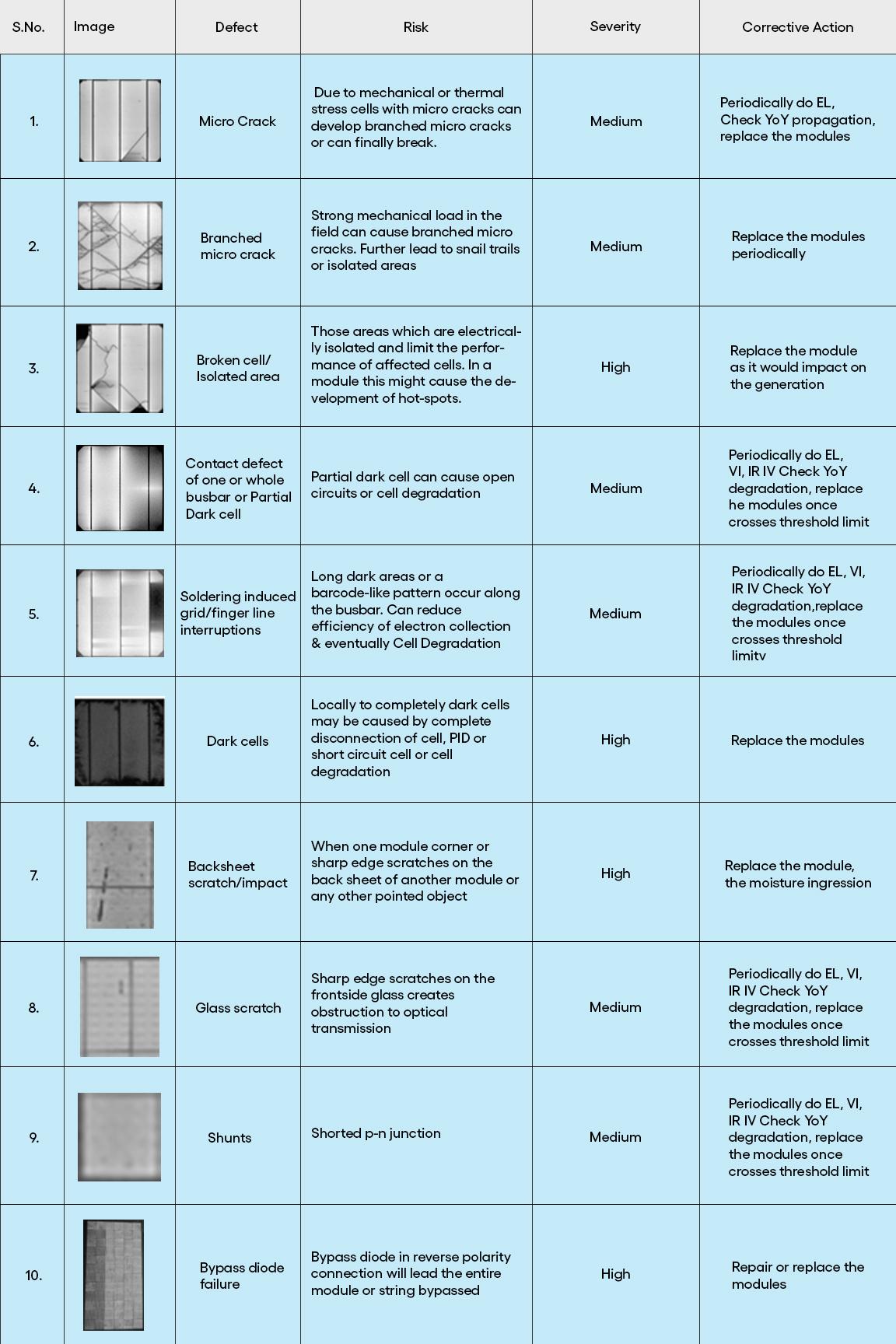 As a result, it was ascertained that had solar panels been under regular maintenance and new-age infrastructural design, a substantial number of faults can be avoided.

Although cyclones are not common in the western regions of the country, Tauktae wreaked havoc with the highest intensity. This has certainly resulted in an alarming condition not just for human life but the whole solar power industry.

The outcome of tests conducted includes a major impact on the frame. If only one can increase the thickness of the frame so as to prevent shading, we can prevent potential impacts. The main lesson that we can derive is that we should be more proactive in developing infrastructure that is easily adaptable to change. Finally, we can replace the modules periodically, as they cross their threshold capacity.

We hope this case study addresses the concerned case and provides you with some information on the detection and reconstruction of the affected photovoltaics.